Phil Siarri
Mar 13, 2019
Amazon entered the food retail space when it launched AmazonFresh in March 2017 and has found other ways to grow its footprint in the sector, acquiring Whole Foods in the process. The retail giant could open 3,000 cashier-less Amazon Go stores by 2021 according to a recent Bloomberg report. New research from RBC Capital Markets even shows that if Amazon opens the projected number of these forward thinking shops by 2021, the company could generate roughly $4.5 billion in sales a year. So… could Amazon Go become the future of retail? Let’s find out. 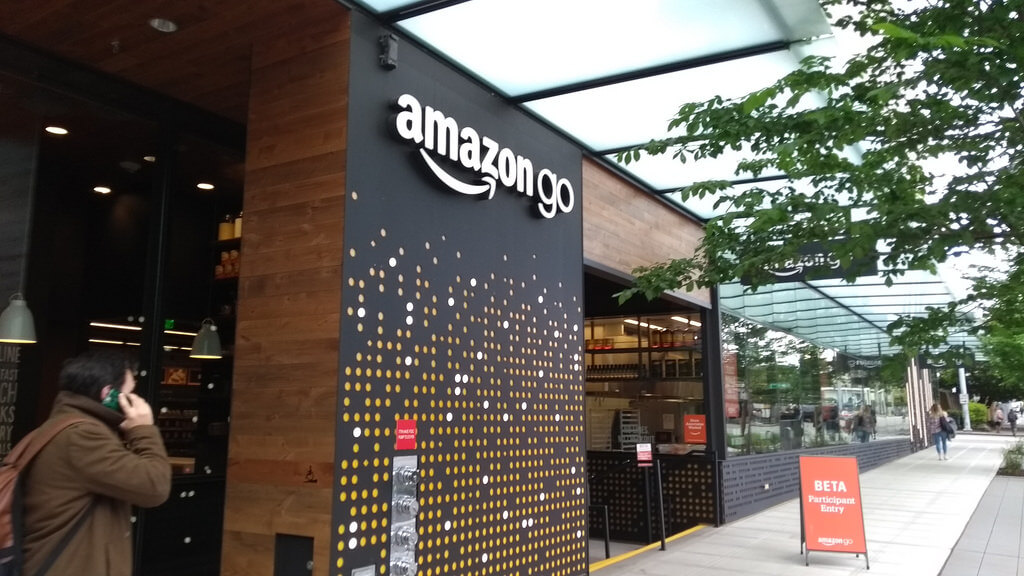 Amazon Go stores are distinguished, modern and evoke a minimalist atmosphere. Contemporary music plays in the background; cameras in the ceiling monitor your every move as you navigate the different aisles.

This setting is similar to other grocery stores but comes with a notable difference: you won’t find any cashiers, cash registers, or self-service checkout stands. You walk in, grab what you need, and go. Amazon bills your credit card as you pass through the turnstile when you exit. A few seconds later, a smartphone app provides a receipt enumerating what you purchased, what you paid, and even how much time you spent inside. You’ve guessed it: that’s a lot of customer data.

At the time of writing, Amazon operates four Go stores in Seattle, three in Chicago, and two in San Francisco. The stores, which utilize advanced image recognition software and artificial intelligence, pledge to significantly improve the retail experience.

A loyalty scheme provides retailers with customers’ personal details during registration and shoppers are given a loyalty card; they can use the card to earn points and redeem these for discounts or prizes and retailers can match their personal data to transaction data and know who they are and what they do. With Amazon Go, the loyalty card could become redundant.

Amazon knows for certain who is “crossing the threshold” (video footage shows turnstiles that can only be opened by a swipe of a mobile phone). Needless to say, each transaction will build “knowledge” and Amazon can use such to deepen the customer relationship, for example by sending real-time promotions.

With the Amazon Go app, the company gets real-time customer feedback, which helps the stores decide what to stock. For example, after hearing from vegans complaining about how cheese is mixed into salads, Amazon Go is now offering the said cheese on the side, according to Dilip Kumar, vice-president of technology of Amazon Go and Amazon Books. Moreover, if stores are overstocked with certain items, the app could (theoretically) send targeted promotions to get rid of such.

Amazon Go’s technology could also become a deterrent for shoplifting. Since Amazon tracks a customer throughout the store using cameras, it will be tougher to steal an item off the shelf. Inventory shrinkage cost the average American retailer 1.33% of sales in 2017, according to the National Retail Security Survey. Amazon Go stores probably have a significantly lower number.

As you can expect, as of now Amazon Go comes with certain limitations. Some customers complained in reviews that stocks were not replenished quickly enough. The stores do not serve hot food or beverages (customers are free to heat up an assortment of refrigerated meals, sandwiches and snacks in microwaves in sitting areas).

And let’s not forget the high operating costs. Mark Mahaney, an Internet analyst at RBC Capital Markets estimated that the hardware for each store cost about $1 million on average and that it would take roughly two years for Amazon to break even. That being said, Mahaney predicts Amazon will come up with “innovative ways” to cut such expenses.

It has been reported Walmart started testing Go-style technology, and Kroger and Microsoft recently announced a joint venture to bring aspects of such cashier-less shopping experience to the grocery store. There are also startups like Mighty AI taking part in this revolution (the young company is working on a framework that tracks items removed from store shelves by shoppers).

Mighty AI Chief Executive Daryn Nakhuda told Bloomberg Amazon Go showed “how far you can go” and that “state-of-the-art went from you-scan checkout technology to Amazon’s ‘just walk out’ approach and everything in between.”

There’s a lot of potential for the futuristic Amazon Go. It is no wonder the retail and tech giant is considering such an aggressive expansion in just a couple of years.

Are malls within malls the future of retail?

Why Retailers Of All Sizes Are Investing In Innovation Labs